Back to all posts

THCnk you for not smoking.

Can roadies still smoke two joints in the morning? 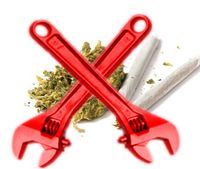 Recently, the production manager came onto our bus before load in to tell the entire crew that smoking pot is not allowed on this tour during working hours. Yesterday, he came on to deliver some fine gifts of cheese and wine from the venue and the whole bus reeked of marijuana cigarettes..... reefers. He did not mention any names nor single any one person. He did make it very clear that pot smoking would not be tolerated while working. This is the way it is on bigger tours these days. Drugs and rock n’ roll do not hang out as often as they did in 1982. I prefer not to smoke only because I don’t function well around people when I get high. However, I really enjoy the company of people who are high, compared to drunk, when I am sober. However, I am much more tolerant to high people than some others.

I heard an especially upsetting story about a crew member that lost their job over pot smokers on the bus. He was a non-smoker on the smoking bus. Despite, several complaints to production, nothing was done to curb the amount of narcotics being used in the back lounge. Soon after the tour, he was called in for a random drug test and failed. He lost his job and subsequently his CDL. Even though some tests have showed that second-hand smoke cannot cause a positive drug test, others disagree. I have written this article to help raise awareness of the repercussions (however meager or hefty) of huffing the herb on tour.

If you smoke pot, go for it.

Smoking weed was all but completely decriminalized as of 2012 when voters in Alaska, Colorado, Oregon, Washington and the District of Columbia chose to legalize small amounts of marijuana for adult recreational use. Since 2012, Twenty-one states and the District of Columbia have decriminalized small amounts of marijuana. This generally means certain small personal-consumption amounts are a civil or local infraction, not a state crime (or are a lowest misdemeanor with no possibility of jail time) according to the National Conference of State Legislatures. In roadie terms, 4:20 is now a free for all. Marijuana is the most commonly used illicit drug in the United States. According to a 2009 national survey, conducted by the National Institute on Drug Abuse, more than 104 million Americans over the age of 12 had tried marijuana at least once and almost 17 million had used the drug in the month before the survey. Smoking pot is not for criminals any more. I support your right to smoke as much Maui Wowie as it takes for you to forget what you just read.

But do it politely.

For fox sake, open the window. Smoke the sinsemilla with some courtesy. Your bus mates who do not smoke (or aren’t smoking at that moment) do not need to bear witness to the smell of the sickly skunk that you just killed in the back lounge. The bus driver will save his company three dollars every time he does not need to come back and decontaminate the temporary wigwam. In the above-mentioned situation, the bus company allegedly had to spend $5,000 to clear the dank away. Do it outside the bus whenever possible.

The land of miniature paraphernalia is wider than all of Bob Marley’s songwriting credits. Buy yourself a small pipe that fits in your pocket. Rubber pipes that won’t set off metal detectors are available at www.roll-uh-bowl.com. Oil pens that look just like vapor sticks are a great way to not look like you are on your way to a Wiz Khalifa after party. They are easily accessible on Google shopping. If you absolutely feel the need to smoke on a bus, I recommend you take a look at www.420bustour.com. Don’t feel the need to broadcast your love for the Doobie Brothers to anyone that doesn’t need to know. Pot smokers will recognize each other quickly enough. You can talk to them about all of your high adventures while you both walk to the Circle K for some Funyuns. People who don’t smoke also don’t care about your high stories and ramblings. Except me, I think they are hilarious. Some of the best stories start with, “So Jeff showed up with this huge bag of weed and then…”

Don't do it during work hours.

Just don’t. It’s the same as showing up drunk. You are impaired. Whether you think you are or not, you are. I don’t want my follow spot operator to giggle every time he mistakes the upstage teaser for the SL guitar player. I can’t stand the drum tech that forgets what I just asked him thirty seconds ago. I don’t want a rigger above me to be impaired in any way. As for the rigger in Las Vegas who claims that he rigs better when he is high, no you don’t. You are a terrible rigger when you are sober. You just forget that you’re a terrible rigger when you are high and continue on your merry way.

Just like a hive of bees, if you don’t bother them (with your pot smoking), they won’t bother you. Your bus mates can complain daily about your pot smoking. Management can choose to take actions or not. If you walk straight into the bee’s hive smelling like a Cheech and Chong weekend, you have left them no choice but to make an example of you. Production can easily turn your smoking bus into a drug free zone, like Malaysia in seconds.

Production is not responsible. You are.

Eventually, the bus will go through a city, town or border crossing of a state that is less hip than Colorado and the bus will get searched. The officials will find your stash. The foot of your bed is not that clever of a hiding place. If they don’t find it on the bus, the drug-sniffing dogs that just show up during rehearsal will find it in your workbox. They will first attempt to pinpoint the responsible culprit. If they can’t immediately tell from the dreadlocks, they will blame/fine the entire crew for the infraction. Once one person on the crew is threatened with having to pay a fine to cover for the pot smoker(s) on the crew, they will quickly point fingers. When it comes to drug use on tour, your actions have repercussions. Sometimes, those repercussions will affect someone around you more than you know. Remember, if you get busted with marijuana in Texas, the headline won’t say “Crewmember Enjoys Pot”, it will read: “Staton-House Band Busted for Drug Possession in Texas”. The Staton-House Band will not be happy about that headline and they will fire whomever in order to clear their name.

It’s no secret that smoking weed has always been a part of the rock n’ roll lifestyle. The hidden secret is that rock n’ roll is now a business. Sex, Drugs and Business should be left to the experts in Amsterdam. If you must smoke to get through the day, please do it politely, discreetly and responsibly.

Chris Lose is a touring lighting director and programmer who doesn’t smoke weed unless Jeff offers. If you would like to tell him what to put in his pipe and smoke it, you can email him at chris@q3lv.com