Back to all posts

The Fixture That Has Been Haunting My Dreams!

Finally a fixture that is truly for EVERY one.
By Chris Lose 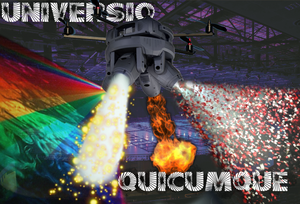 As a contributing writer for PLSN, I have been asked to review a few of the newest fixtures being released. Most of them are, politely stated, very nice. They have all of the same attributes and features that all of the other major manufacturers have but they do them faster or better. The fixture that I just finished testing is, without a doubt, the absolute best fixture that I have ever had the pleasure of witnessing. The Quicumque was sent to me this week from the fine makers at Universio, a not-so-well-known lighting manufacturer based in Hosnia. Inside the box was a very nice letter stating that this is the first fixture that has an attribute for EVERY one. It is a wash, spot, beam, strobe, flood and laser hybrid. I was skeptical at first, but after an hour of programming, I have drunken the Kool-Aid and I am in lust with this product.

The intensity was the first attribute that made me stand up and salute. The 669w lamp provides a beam of light that is whiter than the stagehand crew at the Wisconsin State Fair. This beast of a light puts out a proscenium burning 259,760 lx at 20m (25,100 foot-candles at 65 ft.). I was only able to measure the lumens after I replaced my third light meter. The lamp receives its’ brilliance from a dual core flux radon emitter. This technology was developed in a back storage room of Jakku in 2014. Theo Ridelio, Chief Technical Developer at Universio, obtained the copyrights to the technology in a game of pai gow.

The designers at Ayrton would be envious of the pan and tilt capabilities of the Quicumque. The 42 axes of infinite 64-bit motion make this fixture cumbersome to focus but well worth the time. The first 12 axes of perpetual pan and tilt have a built in feature that scans the audience for cell phone flashlights and emits a laser so powerful that it shorts out the circuitry. Axis 13 and 14 are the actual pan and tilt for the beam. Axis 15 and 16 control the day light laser-programming feature that I still haven’t figured out a use for. Axis 17 has a Congo LED indicator light that helps me find the fixture when I can’t see it in the dark. Axis 18 through 24 Spin multiple 4 degree beams around the arena fast enough to melt any upstage drapery with laser precision. The final 12 axes allow you to simultaneously blind the FOH and the monitor engineer during the guitar solo from any location in the arena.

The Quicumque has seven gobo wheels with eight rotating, indexing, tilting, gobo slots per wheel. Mixing these gobos in various positions and angles allows you create looks that can dizzy even the die-hard Phish fans. After the fist time I made the mistake of using all seven gobo wheels at once, I had to check myself into a 12-step program. I’m feeling much better now. The gobos are separated by functionality across the seven wheels. There is an aerial wheel and a pattern wheel just like most other fixtures. The unexpected features include a sparkle wheel that shoots out a beam of light that makes your artist seem to glitter. Wheel four is called the confetti wheel. The fixture pours out flakes of light that emulate confetti. Wheel five shoots light flames from the front and back of the fixture (Intentionally of course). Wheel six is a multi – color wheel that includes gobos with names such as ‘clown puke’, ‘unicorn spirit’, ‘purple haze’, ‘telemundo’, ‘Charlie Sheen’ and ‘Concert Floor after a Widespread Panic weekend’.

Wheel seven allows you program black spots in the beam anywhere you like. This allowed me the evenly wash the entire stage with one fixture and still leave the drummer out of the light even though he has asked me seven times to light him up even when he’s not playing so that he can find his vodka.

I am fascinated with the color mixing system. I have never seen CMMMMY color mixing in any other fixture. When I asked Theo why they implemented so many magenta wheels, he responded “Butch Allen asked for more magenta, so we gave it to him”. When I asked Butch about the fixture, he could not wait to get his hands on it. The investment in four magenta wheels paid off. The Quicumque has more shades of magenta than a gynecological chart. Split colors used to impress me until I came across the Quicumcue. The Quicumque can produce octo-split colors. A single beam of light that is split eight ways, each with a distinct color. Now I have the ability to ruin a monochromatic look with a single fixture.

The Quicumque boasts a zoom range of 4 to 350 degrees. Your beam fixture is also your stadium work light. This comes in very handy when your local house light guy falls asleep after the 3rd encore.

By warping time and space in the pan and tilt channels, the Quicumque allows designers to bend the beam of light around corners up to a ninety-degree angle. Designers will finally be able to light the drummer who is sitting behind the six-foot-tall downstage center ego riser with ease. The intensity channel also has distance parameter allowing the beam to, seemingly magically, stop in mid-throw. This is made possible through the use of a plasma blade, powered by a kyber crystal that is emitted from a metallic hilt.

Using stagehands to unload trucks and hang fixtures will be a thing of the past thanks to the Quicumque’s ability to unload itself from the trucks. The Quicumque is also self-levitating. No trussing necessary. Once unpacked from the cardboard, the Quicumque receives its’ power from the auto-switching Chi of the Universe. It uses infinite electromagnetism to rise up and self-suspend in mid-air. Once in flight, the exact coordinates can be dialed in using the X, Y and Z coordinates.

Programming the Quicumque is made very simple by the fact that it can receive DMX, ArtNet, RDM, SACN, LUA, C++, PSN and Siri wirelessly. All built in of course. The Quicumque speaks more protocols than C-3PO. The DMX chart wirelessly uploads itself into your console of choice.

I am especially impressed with the control mode selection. Instead of having simple, basic and extended mode, this behemoth has designer specific modes. For example, setting the control channel to 66 puts it in Cosmo Wilson mode. Cosmo mode allows the fixture to perfectly assimilate a 120K Parcan rig with mathematically symmetrical beams and precision timing. Cory Fitzgerald mode forces the single fixture to consume 1025 channels of DMX and will not lamp off until every single feature has been utilized properly. Matt Hills mode provides the most random strobe effect that you will ever know. Robert Dickinson mode shoots Emmy Awards out of the fan covers.

I can’t wait for the rest of the industry to experience this fixture. Several lighting companies enjoy hiring outside PR firms to maximize the publicity of their products by coining new slogans. Most of the time, they come up with ‘cutting edge’, ‘industry-leading’ or ‘next level’. I can safely say that the Quicumque is truly a ‘game changer’.

Chris Lose is a lighting director and programmer based in Las Vegas. He has dreams of a fixture that shoots fire and lasers and confetti some day.
Email chris@q3lv.com to tell him how delusional he is.